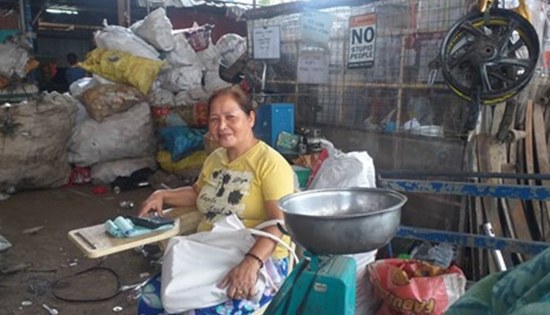 Some people may think of junk as something worthless and trivial, but surely, it is a gem to Perla Boniao.
FEATURE STORY

From trash to cash

SAN PABLO CITY – Junkshops are usually one of those underrated buy and sell businesses. This may be because people think of it as dealing with trash, so they tend to underestimate its true potential in the business industry. But for some people, trash is where they found their treasure.

Perla Boniao is a native of Camiguin Province and has been married for more than 35 years. Three of their five children are already married, while the youngest is currently in her second year in college. Perla also has nine grandchildren who further add joy to their home.

Back when they were still in Camiguin, their family’s source of income was growing root crops. Because the primary challenge of agri-business is the seasonality of the produce, there are some months that their income were not sufficient for their needs. Her husband then decided to work for another farm, but the additional income of P220 per day was still not enough to cover their daily expenses, especially since their two children were in high school at that time.

Their family decided to move to Calamba City in Laguna when her husband found a job opportunity there. Still, Perla felt the need to help her husband to provide for their family. Fortunately, her brother in-law who also resides in the same city, was kind enough to teach her how a junkshop operates. With the enough information she gathered and a capital of P10,000, she managed to start her junkshop business.

Her junkshop accepts almost all kinds of junks including - cardboard, steel, tin, galvanized iron, and paper. Due to her connections with the buyers, she did not have any trouble selling the things she acquired. She was able to earn P2,000 a day which for her is a good start for a first timer like her.

As her business grew, she needed a banking institution she can trust for her financial needs. She found CARD SME Bank, a thrift bank that caters not only to microentrepreneurs like her but also to small and medium enterprises. When she started as their client, she first availed a loan of P3,000. Now that her income from her junkshop business significantly increased, she has availed of a higher business loan to further expand her business.

Because her business is already generating income more than her family’s needs, she can now acquire assets for her family. She now owns a 300 square meter of land where her relatives from Camiguin are now taking care of her ten cows.

“I have nothing but positive things to say about CARD SME Bank. I am grateful for all the support it has given my family and my business,” she explains. Later on, she found out that CARD SME Bank is not just any other thrift bank. It also offers non-financial and community development services like microinsurance. Now, all her family members have insurances that serves as their safety nets in times of uncertainties.

Perla’s story reminds as to always look at the positive side of life. Some people may think of junk as something worthless and trivial, but surely it can be a treasure from a different perspective.