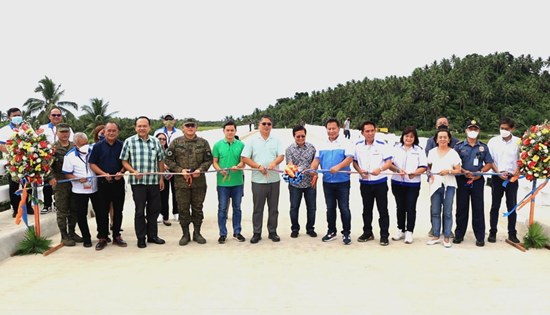 CAMP LUKBAN, Catbalogan City – “Insurgency ends where road begins”, this adage has been emphasized during the inauguration of the Simora Bridge in Laoang, Northern Samar, one of the three bridges under Samar Pacific Coastal Road Project (SPCR) in the province of Northern Samar.

The Simora Bridge is a 161 meters road project that connects the “Pacific Towns” of Laoang and Palapag in Northern Samar especially the barangays that were formerly considered as hotbed of insurgency or identified as Konsolidado, Kinokonsolida, Expansion and Recovery (KKER) barangays.

In his message, Northern Samar Provincial Governor, Edwin Marino Ongchuan said that this project will greatly contribute in reducing poverty incidence since the realization of this infrastructure project will increase economic activities through this improved transportation connectivity.

The Governor is also optimistic that this project will be significant in the government’s pursuit of ending insurgency in Northern Samar knowing that the province has long been dubbed as the stronghold of the Communist Party of the Philippines – New People’s Army – Terrorists (CNTs) in the region.

“There is an adage that says insurgency ends when the road begins. The Provincial Government is very optimistic that this road project will contribute in the eradication of the local armed conflict in this part of Northern Samar,” Ongchuan said.

The incoming Mayor of Palapag, Florencio Fawa Batula is also confident that the Samar Pacific Coastal Road Projects in Northern Samar will be significant in the government’s advocacy of ending insurgency.

“It will cut the insurgency especially that it transcends the interior barangays,” Batula said.

Meanwhile, the Commander of 803rd Infantry Brigade, Colonel Perfecto Peñaredondo said that the Simora Bridge will contribute in the eradication of issues being exploited by the NPA terrorists.

Peñaredondo also believe that this would be a great help in boosting the economy, livelihood and the lives of the people living in the pacific towns who will benefit in the said project.

The construction of SPCRP has long been posed with threats from CNTs which prompted the AFP and PNP personnel to secure and thwart attacks of the NPA terrorist in their goal of sabotaging the project. For the past years, several uniformed personnel paid an ultimate sacrifice in protecting and ensuring the completion of the projects.

With this, Batula expressed his gratitude to the uniformed personnel especially in the military and encourage them to maintain the partnership as they gear towards an insurgency-free province.

“Let’s continue the partnership, mas paigtingin pa natin ang ELCAC especially the CSP program kasi ito lang yung paraan para mairadicate natin yung insurgency in the province, not only in the province but also in the whole country as a whole,” Batula said.

The SPCRP is attributed to the flagship program of President Rodrigo Roa Duterte under the Build Build Build program which aims to achieve peace by enhancing accessibility in the delivery of much needed goods and services that will help stimulate economic growth and reduce the problem of isolation in areas where NPA terrorist thrives.

The completion of the project will eventually establish a circumferential road loop of Samar Island, it will become a major roadlink of Northern Samar and Eastern Samar provinces in the island of Samar.