What’s mine is mine: The intensifying fight of indigenous peoples vs. mining companies in the Philippines

At the height of the COVID-19 pandemic lockdown last April, one of the worst standoffs in recent history between the Philippine National Police and indigenous peoples’ defenders took place. The venue: the Didipio mining site in Nueva Vizcaya. 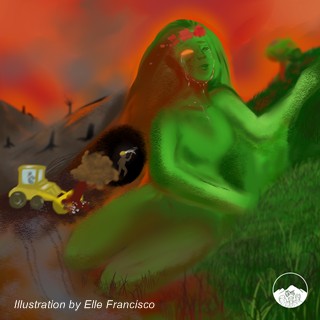 Since the 1990s, the Didipio mining site – a 27,000-hectare biodiversity corridor where the Bugkalot tribe resides – has been exploited and mined for gold and copper, first by the Arimco Mining Corporation, then by the Australasian Philippine Mining Inc., later known as OceanaGold Philippines Inc. (OGPI). Studies have shown that the mining site, which spans the border between the provinces of Nueva Vizcaya and Quirino, holds over 1.4 million ounces of gold and 169,400 tons of copper.

Yet OGPI’s 25-year Financial and Technical Assistance Agreement (FTAA), essentially its permit to operate in the mining site, expired last June 2019. Due to the extensive damage wrought by the mining operations in the communities in Didipio, both the Nueva Vizcaya provincial government and indigenous peoples’ groups have opposed OGPI’s application for renewal.

The wily company, however, sought help from the Mines and Geosciences Bureau, which endorsed their renewal application despite the local government and the people’s opposition. This led to the stand-off last April 2020, where around 100 police dispersed about 30 indigenous leaders who were blocking three fuel tankers from entering the Didipio site.

In a statement, several UN special rapporteurs have denounced the stand-off, saying, “The protesters were exercising their right to freedom of assembly to object against the continued operations in the Didipio mine. The government and mining company should have engaged them in peaceful and constructive talks instead of dispersing the crowd forcefully. The use of force by the police was unnecessary and disproportionate.”

Despite having an expired permit, OGPI remains adamant about continuing its mining operations, opposition be damned. Such a situation is not uncommon in the Philippines, where the rights and welfare of indigenous peoples are usually sacrificed in the name of profit.

Indigenous peoples in the southern Philippines face a similar predicament. Despite concerted opposition by indigenous communities and anti-mining groups, the Sagittarius Mines Inc. (SMI) was able to extend its mining permit for the Tampakan project – a 23,571-hectare mining site located at the intersection of the provinces of South Cotabato, Sultan Kudarat, Sarangani, and Davao del Sur. Like Didipio, Tampakan holds an estimated 12.8 million metric tons of copper and 15.2 million ounces of gold.

The Tampakan mining permit was supposed to end last March 2020, yet SMI was able to secure a 12-year extension without the benefit of public scrutiny or consultation. SMI reasoned that it estimates that it would need at least 70 years to extract all mineral deposits in Tampakan, as it is considered the largest copper mine in the Philippines.

Like the indigenous peoples of northern Philippines, most affected by the large-scale mining operations is the Blaan tribe, whose ancestral domain lies in the Tampakan mining site. Some 4,000 Blaan tribespeople are expected to be displaced by the continued mining activities.

How large mining companies can discreetly renew their permits without the benefit of public scrutiny brings to light questions on how “toothless” the Indigenous Peoples’ Rights Act (IPRA) is when it comes to providing mechanisms for the protection of indigenous ancestral domains and the resources contained therein. While the IPRA enforced the concept of “free and prior informed consent” (FPIC) to supposedly protect indigenous rights and interests and give them a voice in matters that affect them, rarely is this enforced when it comes to mining activities.

Along with the apparent inadequacy of extant laws, many point to the complicity of state agencies and officials in robbing indigenous peoples of the right to defend their land from further damage caused by large-scale mining operations. Even in 2021, indigenous peoples and advocates remain fighting with bare hands against business interests.