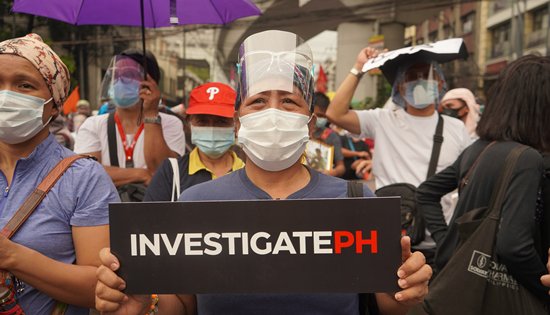 MANILA – There is strong evidence that “domestic remedies" for the many cases of human rights violations in the Philippines “are insufficient and even illusory” while cases of rights abuses escalate in the Philippines according to the first Report of INVESTIGATE PH released Tuesday in Geneva.

The 198-page report confirmed and expanded on the June 2020 Office of the High Commissioner for Human Rights (OHCHR) findings that there is a "deepening human rights crisis in the Philippines."

“With the drug war, the creation of the National Task Force to End Local Communist Armed Conflict (NTF-ELCAC), the July 2020 passage of the Anti-Terrorism Act (ATA), and the Philippine government’s militarized response to COVID-19, the perpetration of human rights violations by state forces has become more institutionalized, orchestrated, and entrenched,” says the initial Report which examined 49 illustrative cases of human rights violations that occurred largely during 2020 and 2021.

“The findings are a damning indictment of the human rights crisis happening in the Philippines,” says renowned human rights lawyer and INVESTIGATE PH Commissioner Jeanne Mirer. “Not only that. We found out that domestic remedies are ineffective at providing redress for the victims,” Mirer adds.

While fellow Commissioner and president of US-based National Lawyers Guild Atty. Suzanne Adely highlights that “there is a grave power imbalance between victims of state violence, and perpetrators who have the backing of government apparatuses. As seen in the report’s findings, the structures to even redress this imbalance are lacking.”

First of three reports by INVESTIGATE PH, this initial paper will be followed by a second report in July and final report in September 2021.

One of the claims of the Philippine government in the recent Regular Sessions of the UN Human Rights Council (UNHRC) is that domestic accountability mechanisms are “functioning as they should.” However, INVESTIGATE PH Report’s scoping review of cases, interviews with victims and witnesses, and validation from a repository of currently available evidence, point in the other direction.

The investigation identified 10 indicators that led it to the conclusion that there is failure of domestic remedies. Firstly, there is obstruction of state authorities on investigations where police plant evidence and refuse to comply with Supreme Court orders and requests by the Philippine’s Commission on Human Rights to release documents.

The other nine indicators discussed in the Report are: 1. investigations of violations are not impartial; 2. available mechanisms for civilians to hold police and military accountable are failing; 3. court protections are inaccessible, slow, and discriminatory; 4. government’s NTF-ELCAC constricts recourse to government agencies; 5. counter-insurgency activities are targeting lawyers, denying victims access to independent counsel; 6. efforts to challenge unjust laws through legal channels are being dismissed in court or repressed; 7. opposition political voices providing a check on the armed forces and executive power have been eliminated from the Supreme Court and Congress; 8. independent institutions and alternative platforms for accountability have been eviscerated or made practically inoperative; 9. even when remedies are secured, they are inadequate justice.

UNHRC, world has to act now

The Report and its Recommendations were first presented to the UN High Commissioner for Human Rights, Ms Michelle Bachelet, on Monday March 15 in Geneva.

One of its recommendations is for the UNHRC to urge its member states, relevant United Nations agencies, and other stakeholders to make use of international mechanisms, saying that the Council need to create “commissions of inquiry, fact-finding missions, or investigations, to help improve the human rights situation in the Philippines, exert accountability, and deliver measurable as well as reliable justice to victims.”

The Commissioners emphasized the need for these measures. “There is a sense of urgency here. The killings and degradation of human dignity are escalating as seen in the Report. The UNHRC and the world has to rise to the challenge of putting an end to this. We have to act now and save innocent lives while we still can,” says INVESTIGATE PH Commissioner Rev. Dr. Susan Henry-Crowe of the General Board of Church and Society, the United Methodist Church.

As the Report is being released publicly, there is news from the Philippines that a local law enforcement committee in Cordillera, Northern Philippines, has ordered a “tokhang” (purge) against “left leaning personalities.” And Police raids in Southern Tagalog on March 7, 2021, resulted in the massacre of nine trade unionists, indigenous leaders, and urban poor organizers, suggesting events are on the cusp of heightened bloodshed.

The recommendations also asked for the International Criminal Court (ICC) to receive the initial and succeeding reports of INVESTIGATE PH and “expedite the process of bringing the preliminary examination to a conclusion.” The Report also urged the global tribunal to “make a decision on whether to seek authorization to open an investigation into the situation in the Philippines.”

Philippine president Rodrigo Duterte has continuously barred past UN investigations, and even threatened to arrest an ICC prosecutor probing the “War on Drugs”. In 2018, his administration’s Department of Justice sought to place a UN special rapporteur on the rights of indigenous peoples on a “terrorist” watch list.

“We launched this investigation because our organisations stand unequivocally for international human rights standards,” says Commissioner Dr. Agnes Abuom who is the Moderator of the Central Committee of the World Council of Churches.

“Our members and partner churches in the Philippines have been the victims of the violations themselves. Filipinos are calling for our help and INVESTIGATE PH is a step towards exacting justice and protecting the many lives who are in danger,” Abuom adds.

In the online launch of the report, Commissioner Rev. Dr. Chris Ferguson of the World Communion of Reformed Churches reiterated that “this investigation raised hopes among the victims in search of justice. It raised hope that help may be found from the international community. That is why we have to play our part which is to seek the truth, challenge the horrifying violations of human rights, use all available international mechanisms to put an end to it all and ultimately, no matter how protracted, hold the perpetrators accountable.”