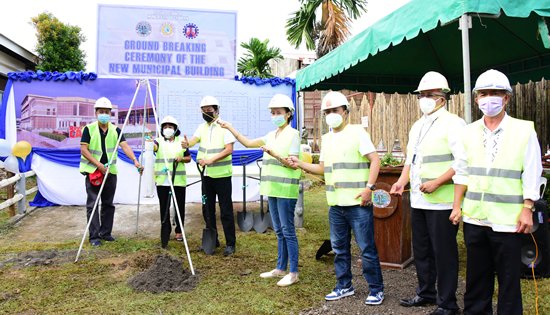 NAVAL, Biliran – A new and a modern state of the art Municipal Building will soon rise in the town of Caibiran as the Department of Public Works and Highways (DPWH)- Biliran District Engineering Office (BDEO) kicks off the construction of the building.

According to Briones, the 3-storey municipal building has a modern structural design with a total floor area of 2,377.8 sqm and will rise in a 33x26 meter-lot area.

“Maganda po ang soil dito (site), the stability of the building is fair enough to sustain the 3 floors of the structure,” said Briones.

Briones added the new Municipal Building has a complete civil, electrical, plumbing and sanitary works including air conditioning and other wall finishes. The said project has an appropriation amount of P30M under contract with Chu Construction.

DE Briones revealed that this project will be completed by early part of January or February of 2022.

When completed, the new municipal building will provide a spacious and a convenient workplace for the LGU employees which in return will give a hassle-free transactions and a more quality service for their fellow Caibiranons.

Mayor Revita, in her speech, expresses her gratefulness to Congressman Gerardo Espina Jr. and Governor Rogelio Espina for their strong support in the realization of this project.

According to the Mayor, the said project is a dream come true for the people of Caibiran. She encouraged her constituents to continue delivering good public service to attain its vision for a more vibrant and revitalize Caibiran.

Aside from the new Municipal Building, DPWH-Biliran DEO will also implement a total of P8M for the construction of new legislative building and P41M Water Supply System in Caibiran town under FY 2021 implementation.