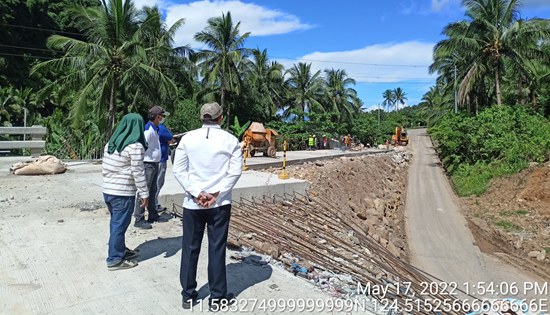 District Engineer Ferdinand A. Briones together with Engr. Luisito Filemon A. Abad, Chief of Construction Section with its technical team inspect the on-going construction of Macalpe Bridge along Naval-Caibiran Cross Country Road (NCCCR) on May 17, 2022.

NAVAL, Biliran – The dynamic District Engineer of Biliran District Engineering Office (DPWH-BDEO), Engr. Ferdinand A. Briones, conducted his routine inspection on some of the department’s ongoing projects on Tuesday, May 17. He was accompanied with a six-man team from the Construction Section and the respective contractor representatives to assist in the evaluation and assessment of the projects.

The recently inspected bridges are currently undergoing major upgrades in connection to future developments targeted for the NCCCR network. The bridges of Cabadiangan, Alawihaw and Gueron are currently in their early stage of widening and retrofitting works while the Macalpe Bridge, a new addition to the road system, is now nearing project completion.

The slope protection project at Brgy. Looc, Cabucgayan is also at its early stage of construction projected to be completed by December this year.

The inspection is part of a series of routine site visits by the District Engineer and his team to ensure optimum and quality delivery of public works, assess actual status of ongoing projects, and to address project planning and implementation issues/challenges along the way. These site visits proved important with the vibrant activities and projects that the department is handling and actively engaging with in the current years for the province of Biliran.