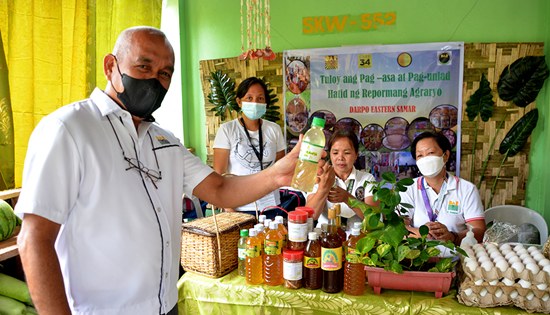 Ong shared that most of the ARBOs products, from fresh fruits and vegetables to processed foods, were sold out.

On processed foods, Ong proudly shared that 13 ARBOs in Region-8 were already given license to operate by the Food and Drug Administration commonly referred to as FDA-LTO; while one product was issued with the Certificate of Product Registration (CPR), making them qualified to penetrate a larger market.

The Agraryo Trade Fair was among the highlight activities during the month-long twin-celebration of the 34th year of Implementation of the Comprehensive Agrarian Reform Program (CARP), which covered all agricultural lands under the agrarian reform program regardless of tenurial arrangements, and the 50th year of Presidential Decree 27, emancipating tenants from the bondage of the soil.

Regional Director Robert Anthony Yu emphasized in his message during the opening of the trade fair, “We are showcasing here the results of all the interventions we provided to the agrarian reform beneficiaries (ARBs) under CARP’s provision of support services component.”

As Provincial Director Ruthelma Samonte of the Department of Trade and Industry (DTI) described the ARBs now, “They are no longer farmers by themselves, but we call them CARPreneurs (for CARP entrepreneurs), which means, they are already into business.”

Samonte advised DAR during the said occasion, “We must prepare them for the bigger market.” She stressed, “The ARBOs must be prepared in terms of production.”

“With institutional buyers, they must be ready with the supply,” Samonte added.

Meanwhile, representatives from the Department of Agriculture (DA) and Department of Science and Technology (DOST), Francisco Ocado and Lysander King III, respectively, committed their agency’s continued support in helping the ARBOs develop potential products as additional livelihood to their farming activities.