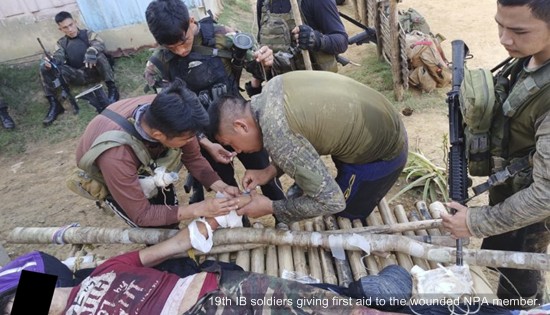 MATUGUINAO, Samar – A member of the terrorist New People’s Army succumbed to death after an encounter with the operating troops of 19th Infantry Battalion (19IB) a few kilometers away from Barangay San Roque, Matuguinao, Samar on March 6, 2021.

The troops clashed against ten (10) NPA terrorists in the afternoon of the said date leading to a 30-minute firefight that resulted to the capture of a wounded NPA who was abandoned by his fleeing comrades.

Determined to keep the wounded NPA alive, the troops immediately provided immediate medical care and evacuated the casualty to the barangay proper for further medical assistance.

The wounded NPA identified himself as Oti Ogacho, 23yo, and a resident of Brgy. Mahanud of the same Municipality. He was presented to the barangay officials and residents of Brgy San Roque, Matuguinao, who confirmed his identity and recognized him as a known NPA member operating in the area.

The wife of Oti Ogacho also arrived at the Barangay hall to accompany her husband. Residents further revealed that the wife is also an NPA member who went on lie-low in order to deliver her second child two (2) weeks ago.

However, while waiting for assistance to evacuate Oti to the nearest hospital for further medical attention, he passed away due to the effects of the gunshot wounds he incurred during the encounter.

“It is so sad that another life is gone, wasted, because of the CPP-NPA’s deception. Our soldiers were determined to keep the wounded NPA alive because we know his family needs him, especially his newborn child. It is also a norm for us soldiers to treat the wounded even if he is an enemy. ‘Sir buligi ak, Karuyag ko pa mabuhi mayda ako duha na anak ngan bag-o la nanag anak tan asawa’ - those are the words Oti uttered to the troops before taking his final breath,” Lieutenant Colonel Fernando C Engcot, Battalion Commander of 19IB, said.