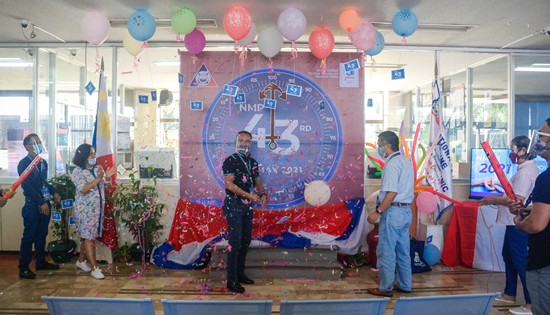 TACLOBAN CITY – The National Maritime Polytechnic (NMP), established in the year 1978 by Presidential Decree No. 1369, sets its pace through the unveiling of the 100-Days countdown marker last 22 January 2021 in celebration of NMP's 43 years in public service providing competitive and quality trainings & researches to the Filipino seafarers.

With this year's anniversary theme: "Enhancing the Filipino Seafarers' Capabilities through NMP Trainings In Meeting Global Competitiveness Towards Adopting The New Normal", a challenge and reflection was injected by NMP's Deputy Executive Director, Mayla N. Macadawan in her opening remarks, "This is not the occasion we imagined it to be. It's not going to be a normal celebration but nevertheless, with our initiative and resilience we always find ways to give meaningful occasions. The wisdom of putting NMP in Tacloban City is we are at the heart of the country making us accessible to both the two major islands of the country. Therefore, let's look back to 43 years as a premier & the only maritime training & research center with the need to evolve and continuously meet the demand of the advancing maritime world."

The event was concluded with the words of encouragement from the Executive Director of NMP, Joel B. Maglunsod mirroring on the importance of unity as a great factor in achieving success and the persistent attainment of the NMP's vision and mission.

"This occasion must be marked by the dedication and commitment of all NMP employees who have been serving the Filipino people in general, and the Filipino seafarers in particular, for the past 43 years" said Executive Director Maglunsod.

NMP, an attached agency of the Department of Labor and Employment (DOLE), was established as the government's response to the immediate and dire need of updating and upgrading the capability and qualifications of maritime licensed officers and other marine graduates for their increased acceptability for employment in international and domestic fleets. Also, the agency has a satellite office located at Makati City but soon to transfer to a more reachable location at the DOLE Office in Manila.

Apart from its training operations, NMP also conducts industry researches towards improving the Philippine maritime workforce with its findings adopted as inputs in the formulation of maritime education and labor and employment policies.