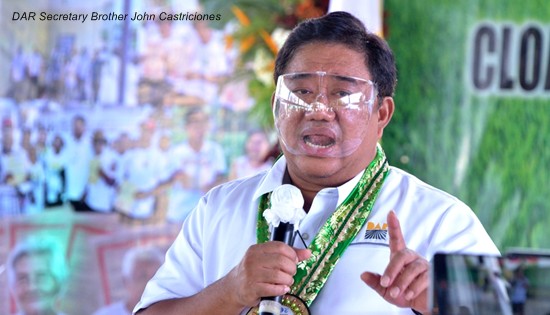 TACLOBAN CITY – Agriculture graduates can now avail of farmland under the Comprehensive Agrarian Reform Program (CARP) where they can apply their knowledge on farming as Agrarian Reform Secretary Brother John Castriciones signed Department of Agrarian Reform (DAR) Administrative Order No. 03, series of 2020.

During the Radyo Agraryo program aired on Monday (December 7) over Radyo Veritas, Castriciones announced that he had already signed the said law that would allow agriculture graduates to become agrarian reform beneficiaries (ARBs) of CARP’s Land Transfer Program.

The new law will take effect 10 days after it has been published in the newspaper of general circulation.

To qualify, DAR Undersecretary for Legal Affairs, Luis Meinrado Pañgulayan, explained that aside from being a graduate of a four-year agriculture-related course, the applicant must be landless; living within the municipality where the land to be awarded is situated; has the aptitude to make the land productive; and not an applicant of any other DAR’s land transfer programs.

He emphasized that an applicant need not be a fresh graduate.

Once this new law takes effect, Pañgulayan said, interested applicants can file letter of intent at the Municipal Agrarian Reform Office (MARO) in their area, and fill out the forms that will be provided to them.

A certification from the school registrar, where they completed their studies, attesting that the applicant is truly a graduate of an agriculture-related course must also be submitted, Pañgulayan added.

Two weeks ago, Castriciones shared when he distributed Certificates of Land Ownership Award (CLOAs) in Alangalang, Leyte, that his agency is preparing an administrative order that would grant graduates of agriculture-related courses a maximum of three-hectare farm lot under CARP for their laboratory.

With the signing of the new administrative order, Castriciones calls on parents to encourage their children to take agriculture-related courses to boost the country’s agriculture sector.

He reported that per inventory, there are approximately 230,000 hectares of government-owned lands (GOL) that may be involved all over the country.