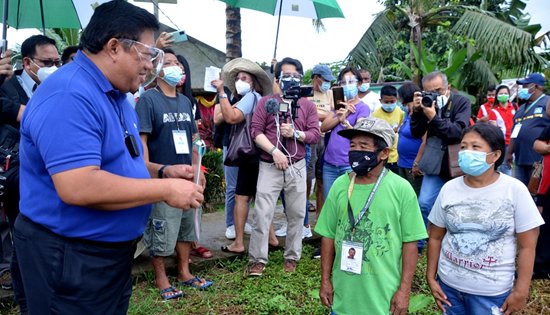 ALANGALANG, Leyte – Despite the sudden heavy downpour, Department of Agrarian Reform (DAR) Secretary Brother John Castriciones did not back out from his original plan of delivering the Certificates of Land Ownership Award (CLOAs) to six agrarian reform beneficiaries (ARBs) in a remote village here under the “DAR to Door” program.

Upon his arrival on Wednesday (November 25) in Tacloban City, Castriciones went directly to this town, which is some 30 kilometers away.

Accompanied by his deputies, Undersecretary David Erro of the Field Operations Office and Undersecretary Carim Panumpang of the Special Concerns Office, Castriciones proceeded to Barangay Lourdes, which is still about five kilometers away from the town proper.

While in the middle of his talk with ARB Francisco Catindoy in the land the latter is tilling, heavy rain suddenly poured. But Castriciones patiently waited in a nearby house of Bernardo Lagaday, another ARB, for the rain to subside to continue with his purpose of delivering the CLOAs to the homes of the four other recipient farmers in the area.

From Barangay Lourdes, Castriciones went also to Barangay Bobonon to deliver the CLOA of Alicia Tabernero, who became emotional when she received the land title.

Tabernero, as she thanked Secretary Castriciones, shared that she had been wishing for a long time that the land she was tilling would be hers someday, and that her wish is now being realized. She added that she valued much that land especially the time that she was sending her children to school.

On the following day, Castriciones went back to this town and distributed in a formal rite at the municipal covered court 1,280 more CLOAs covering an aggregate area of over a thousand hectares to 1,042 ARBs from other farming villages in this municipality as well as from the towns of Barugo, Burauen, Capoocan, Carigara, Dagami, Jaro, Kananga, and Pastrana.

Castriciones described the farmers as true heroes of our nation.

Meanwhile, MAALSADA-Farmer Irrigators Service Cooperative (FISCO) was honored on the same occasion as outstanding agrarian reform beneficiaries organization (ARBO) in the region for garnering the highest product sales encompassing both the traditional and institutional markets, at P13.3-million from March to October this year.

However, Reynaldo Peja, chairman of the MAALSADA-FISCO, begged to increase the buying price of rice. At present, a kilo of rice is sold at P12 only.