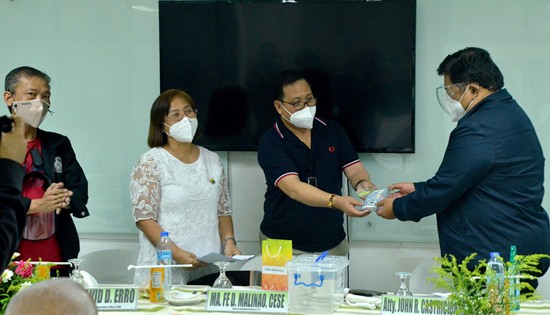 TACLOBAN CITY – OIC-Regional Director Ismael Ay-ay of the Department of Agrarian Reform (DAR) in Eastern Visayas turned over on Friday P201,000.00 to Agrarian Reform Secretary, Brother John Castriciones as financial assistance for colleagues in Regions II and V who were severely affected by Typhoons Rolly and Ulysses.

Aya-ay disclosed that the said amount was a combined contribution of all employees throughout the region.

Even the contractual and job-order employees did not hesitate to voluntarily share any amount they could afford. No matter how small an amount is, but when summed-up, we were able to raise more than P200,000.00, Aya-ay added.

According to Girlie Costa, a job-order employee assigned at the Land Tenure Service Division, “we can feel how they feel now because we’ve been through the same situation when Typhoon Yolanda struck our region in 2013, and they were there to help us recover from devastation.”

“Now, it’s our time to help them. It’s time that we show them our love even in a small way,” said Costa.

Meanwhile, Castriciones was in the Region 8 last week to distribute Certificates of Land Ownership Award (CLOAs).