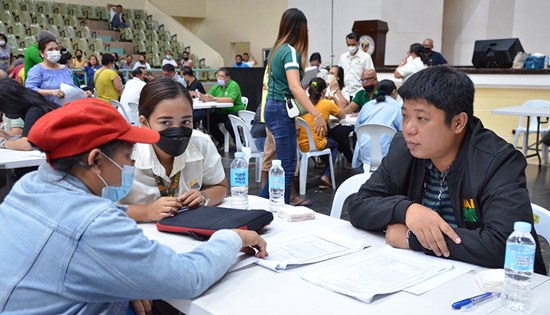 Nearly 300 tenants and agrarian reform beneficiaries availed of the free legal clinic conducted by the Department of Agrarian Reform (DAR) on June 14 at the Ormoc Superdome.

Nanay Estrella, 64, was among the nearly 300 farmers and agrarian reform beneficiaries (ARBs) from this city and adjacent towns who went to the Ormoc Superdome to avail of the free legal clinic conducted by the Department of Agrarian Reform (DAR) on Tuesday.

She was with her brother Julieto, 60, and neighbor, Melania Aldiano, 74, who went to the venue as early as seven o’clock in the morning to be the first in line. The three are from Barangay Licuma, more than 10 kilometers away from the city proper.

Nanay Estrella said they wanted to consult and be enlightened about their Emancipation Patents (EPs) and Certificates of Land Ownership Award (CLOAs) that were cancelled after more than a decade since the land titles were awarded to them.

After they were entertained, Nanay Estrella shared, “Binigyan kami ng Assurance. Pag-aaralan daw nila ang kaso namin.” (We were given assurance. They will study our case.)

Like Nanay Estrella, Tatay Julieto and Nany Melania, many of those who availed of the legal services for agrarian-related issues, went home satisfied and with revived hopes.

Provincial Agrarian Reform Program Officer II (PARPO II) Josefina Corazon Turla disclosed that the activity was the fulfillment of DAR Undersecretary Elmer Distor’s promise to the farmers who presented various issues during the dialogue he attended in this city last month.

Aside from the central office team, lawyers Christopher Ryan Rosal and Daniel Pen, Legal Division chiefs of the regional and provincial offices, respectively, together with their legal officers joined in addressing the legal problems of the farmers.

The conduct of the legal clinic is among the activities lined up in the month-long celebration as the agency commemorates the 34th year of implementation of the Republic Act No. 6657 otherwise known as the Comprehensive Agrarian Reform Law (CARL) which covered all agricultural lands under the agrarian reform program regardless of tenurial arrangements, and the 50th year of Presidential Decree No. 27, emancipating the tenants from the bondage of the soil.