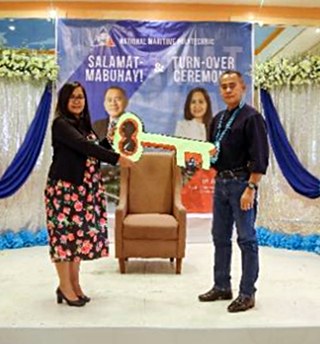 Outgoing ED Maglunsod in his message shared, “I am deeply honored to turn-over to Ms. Mayla N. Macadawan, OIC Executive Director, the symbolic key and NMP flag which symbolize the responsibility to take the lead of the National Maritime Polytechnic particularly in attaining its mission to train and upgrade the competencies of the Filipino seafarers and provide maritime researches which are attuned to the needs of the maritime industry”.

In her acceptance speech, OIC ED Macadawan took note of her predecessor's “many accomplishments” which, she said, are “difficult to replicate.” She, however, urged NMP employees to help her “take off from and carry on a lot of things that still need to be done.”

“I accept the challenge of steering NMP in pursuit to the delivery of its mandates and functions. We will continue to be a key mover in the maritime industry through quality and responsive maritime education, trainings and researches”, she expressed.

OIC ED Macadawan will maneuver NMP until 31 July 2022, or until a replacement has been appointed or designated, whichever comes first.