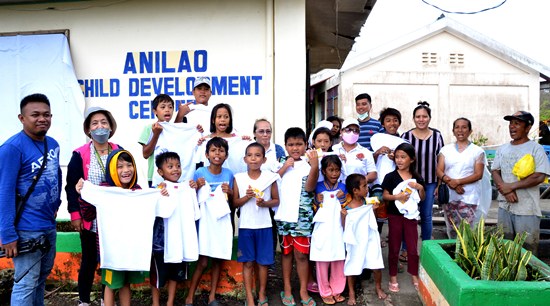 LILOAN, Southern Leyte – Members of agrarian reform beneficiaries organizations (ARBOs) in the Panaon Island area are so grateful for the relief assistance that keeps on pouring from various sectors.

In the afternoon of December 16 last year, Super Typhoon Odette made its third landfall in this town leaving many families homeless.

Ligtas shared that they have provided the member of the five ARBOs, who are all severely affected by Typhoon Odette, with food items, drinking water, garments and “trapal” (tarpaulin) to address their current needs.

The team likewise distributed shirts and biscuits to children at the Anilao Elementary School, which serves as evacuation center, where some agrarian reform beneficiaries (ARBs) are taking refuge.

On December 29, 2021, the same relief goods were received by the members of the Tuno Farmers Multi-Purpose Cooperative and the Cangcasto Farmers Association, Ligtas added.

Ligtas shared that more than 400 ARBO members from the two municipalities, mostly ARBs, were benefited. However, they are begging for housing materials to rebuild their homes that were destroyed when the typhoon hit the province nine days before Christmas.

ARB Ma. Nita Palabrica, 52, and a mother of three, appeals to those who are still planning to bring relief assistance for the typhoon victims, “Sana financial assistance na lang para makapagpatayo kami ng kahit kubo lang” (We hope for financial assistance instead, so we could build even a small house only.)

Palabrica’s family is among those who are still staying in the evacuation center after their houses were crashed down by the typhoon.

According to her, their house was knocked down by a coconut tree. Now she, her parents, and her younger brother, are crammed in one bed to sleep in a corner of their broken house with a makeshift roof.

She appeals for housing materials they would use in repairing their house.

Josefa Lupas, 72, was lucky that she and her paralyzed ARB husband were able to evacuate before the typhoon came but was dismayed when they returned the following day to see their house, which stands along the seashore, heavily damaged.

Almojicar is also asking for materials they could use in repairing their organization’s building which include a “sari-sari” store.

Just like what happened to many houses all over the province, the roof of the said organization’s building was blown away by strong winds, and consequently, everything inside were damaged.

According to Almojicar, members of their organization, who are all farmers, are dependent on the store for their daily needs.