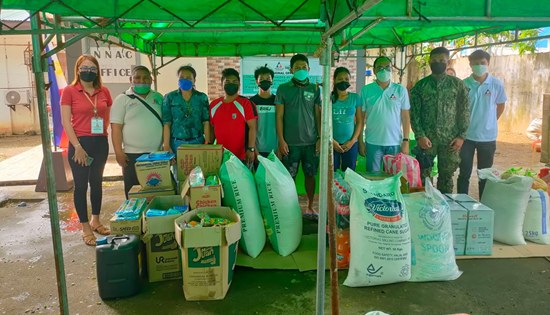 Temporarily sheltered in the government-managed half-way house in Barangay Dalakit, the Darangpan Center, the former rebels had surrendered to the Armed Forces of the Philippines (AFP) and have since been receiving comprehensive assistance from various government agencies, including the Provincial Social Welfare and Development Office (PSWDO), the Department of Education (DepEd), the Technical Skills Development Authority (TESDA), and many others.

DOLE-NSFO, in collaboration with the Regional Task Force to End Local Communist Armed Conflict (RTF-ELCAC) and the PSWDO, has enrolled the former rebels in the DOLE Integrated Livelihood Program (DILP), which provides in-kind livelihood assistance amounting to a maximum of P30,000 to qualified and deserving beneficiaries. This initiative, a result of the consultative meeting between DOLE-NSFO and Northern Samar Provincial Governor Edwin Ongchuan, intends to change the lives of former rebels and their families by providing them with sustainable sources of income and help them reintegrate into mainstream society.

Joy, a former member of the NPA who collected extortion money – often called “revolutionary tax” – from residents of remote communities in Catarman to fund the communist group, said that he joined the NPA because he had little choice at the time, with subsistence farming barely making enough to feed and support his poor family. When life in the mountains became too risky and difficult, he decided to surrender, hoping to give his family a better life away from the insurgency.

During the formal turn-over ceremony held in the Darangpan Shelter attended by representatives of DOLE-NSFO, DepEd, PSWDO, and the AFP, Joy formally expressed his appreciation for the assistance he and the other former rebels have received from the government.

He likewise thanked DOLE-NSFO, led by Provincial Head, Virgilio A. Doroja, Jr., for the livelihood assistance, which will help him and his fellow rebel returnees ease back into their normal lives and into their new homes and communities.

The second round of distribution, consisting of livestock kits, is scheduled on February 23, 2022 in Catarman, Northern Samar.