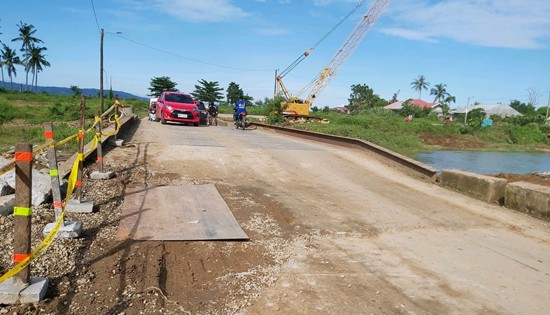 Effective 6:00 AM October 27, Caraycaray Bridge Detour along Biliran-Naval Section is open to all types of vehicles. DPWH-Biliran DEO in coordination with LM Baltonado construction complete the restoration works of the scoured approaches (Caraycaray Side) after being damaged by continuous heavy rains brought by Tropical Storm “Quinta”.

NAVAL, Biliran – The Department of Public Works and Highways (DPWH)- Biliran District Engineering Office (DEO) has completed the restoration works of the scoured approaches of the Caraycaray and Catmon Bridge detours.

David P. Adongay Jr., District Engineer informed that effective 6:00 AM on October 27, 2020 the Caraycaray and Catmon Bridge detours along Biliran-Naval section are now open to all types of vehicles (lightweight, four (4) wheels and heavy equipment).

Restoration works which involve backfilling were done in coordination with DPWH-BDEO and LM Baltonado Construction.

According to Adongay, DPWH-Biliran DEO is exerting their efforts and closely monitoring and coordinating with the contractor under contract with DPWH Regional Office VIII to restore the said detours for the safe passage of the motorists and the travelling public.

“These detours are deemed important as the construction of both Caraycaray and Catmon Bridges are on-going at present,” said Adongay.

“Travelling public especially heavy equipment operators will no longer need to take a longer route to travel to the capital town of Naval and to its neighboring municipalities,” the District Engineer added.

The District Engineer also acknowledges the help extended by Businessman Mr. Robert Juve Yao Ang to fast-track the repair of the detours.

The Caraycaray and Catmon detours were damaged due to continuous heavy rains brought by Tropical Storm “Quinta” on October 25, 2020.