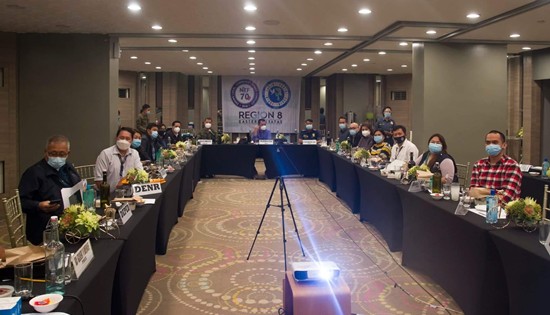 This was in view of the Regional Peace and Development Roadmap to attain a just and lasting peace by the year 2022. It was learned that the budget for the target barangays in 2020 was diverted to address the COVID-19 pandemic, but that the priority projects have been included in the proposed 2021 ELCAC budget.

CORDS Del Rosario informed that the National Task Force has been lobbying for the approval of the 2021 ELCAC funds which is being opposed by the Makabayan Bloc. The ELCAC funds is intended for PPAs of the barangays, and will not be released to the national agencies.

Eastern Samar Governor Ben Evardone shared that the Governors’ League has passed a resolution to adopt the ELCAC Budget and has forwarded the same to the Senate and House of Representative copy furnished Makabayan Bloc.

Meanwhile Leyte Governor Leopoldo Dominico L. Petilla, chair of the Regional Development Council, said that poverty is the greatest recruiter of insurgency. He stressed that the road to peace must always pass through economic development. To this, Governor Evardone who chairs the EV Regional Peace and Order Council, said that his province has formed an Anti-Poverty Team to focus its efforts in implementing projects intended to address insurgency.

CORD8 Del Rosario praised RTF8 ELCAC for its accomplishments. He said that the targets remain the same that’s why the Task Force needs to implement its catch up plan. Various organizations should be invited so that there will be coordination and optimization of the resources. Meanwhile National Security Adviser Hermogenes Esperon commended RTF8 for being the first region to deploy the RCSP teams, which has resulted to several cleared barangays for 2020.

Meanwhile the Task Force passed a resolution endorsing the inclusion of the 93 barangays cleared in 2020 for possible funding in the 2021 budget Samar 2nd District Cong. Sharee Ann T Tan will be the “spokesperson or voice of Region 8” in Congress for the approval of funds. She requested from the NSC that she be given a copy of documents as proof to the approval of ELCAC funds. NSC will coordinate with Cong. Tan on this matter.

Under this proposal each target barangay will be given P20M. The menu of PPAs are the following:

• Farm to Market Roads (FMR) for P12M each (DA & DPWH)
• Schools for P3M each (DEPED)
• Waterworks and irrigation projects worth P2M each (DILG)
• Health stations at P1.5M worth each (DOH)
• Reforestation/ National Greening Project worth P1.5M each (DENR)
• A total of P1.86B for 93 barangays is being eyed for allocation to Region 8.

Gov. Petilla for his part expressed his gratitude to President Rodrigo R. Duterte and Senator Bong Go for approving the Kaulisihan funds in Baybay City, Inopan and Hilongos, all in the Province of Leyte. The approval of P640M worth of FMR projects was already endorsed by RDC8 for approval in the 2021 budget. DILG together with the NEDA Regional Office serve as the secretariat to the RTF8 ELCAC.