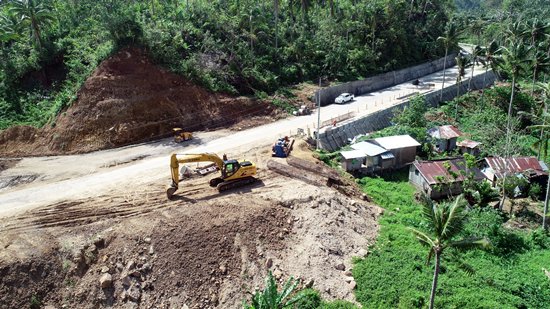 The site of the said project was previously an existing concrete paved road but was totally washed out during the onslaught of Tropical Storm (TS) Urduja on December 16, 2017.

David Adongay Jr., District Engineer said that the project is now in full swing under contract with L.M. Baltonado Construction.

“The project is now on-going in the preparation for the foundation works of the bridge,” revealed Adongay.

“The site is critical for sudden landslide specially during heavy rains, thus the contractor was instructed to fast track the project to avail the good weather condition,” he added.

According to Adongay, there is a need to construct for a new permanent bridge on the said section because a large volume of water crosses the roadway especially during rainy season.

The project involves the construction of a 4-lane bridge with a width of 13.4 meters with a total length of 20.0 meters or a total area of 291.43 square meters. This project has a target completion date on June 25, 2020.

When completed, this project will provide a structure that can accommodate big volume of rainwater, minimize vehicular accident as well as provide convenience in transporting agricultural and aquatic products to market centers.

This bridge is essential in going to the only Provincial Hospital and Port of the Province and some tourist sites within the island. It will serve more or less 3,000 travelers along Naval-Caibiran Cross Country Road (NCCR).

Presently, DPWH-Biliran DEO maintains a total of 35 national bridges within its jurisdiction with a total length of 1,250-linear meter of both asphalt and concrete surface. The completion of the new Macalpe Bridge would be an addition to this total length of bridges.