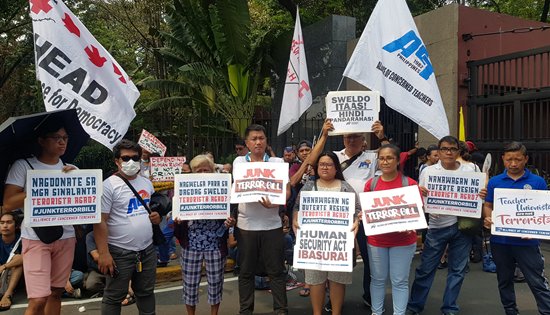 QUEZON CITY – The Alliance of Concerned Teachers (ACT) Philippines opposed the proposed 'draconian' amendments to the Human Security Act (HSA) of 2007, which the group says will 'render teachers' just fight for decent pay and benefits, better services, and social justice as acts of terrorism.' The House of Representatives is set to hold a committee deliberation today on the proposed amendments. Earlier, Senate already approved on 3rd and final reading the Anti-Terrorism Bill that sought to overhaul the 2007 HSA.

"This is yet another attack on our rights and liberties. Not only are we denied livable wages and dignity with the President's treacherous passing of an insultingly meager pay hike, now we are at risk of being called terrorists for demanding more and what is due us," decried ACT Secretary General Raymond Basilio.

ACT said that both versions of the Senate and lower house contains 'vague and overbroad' definitions of terrorist acts with 'grave consequences,' such that legitimate exercises of rights may be deemed as such 'should the state say so.' Said acts are punishable by at least 8 years to life imprisonment under the proposed amendments.

"Say for instance, we take to the streets again to call for salary upgrading, the state has the authority to say that the intentions of such is to 'intimidate the government to do something' and it instantly becomes terrorism. Even calling on DepEd to release our benefits can be tagged as terrorism under these proposals. These are horrid and disturbing affront to our hard-won rights, and we all should fight back," called Basilio.

The teachers' group furthered that the proposed amendments to HSA will greatly contribute to the quickly shrinking democratic spaces amid a time of unrest in the country due to worsening socio-economic conditions.

"Instead of providing relief to the people, the government wants to punish us for seeking redress over the people's suffering, which no less than their own policies have caused – like the SSL 5, TRAIN Law, Rice Tarrification Law, war on drugs, EO 70, among others," hit Basilio.

ACT said that the proposed measure will be 'dangerous at the hands of an administration who is intolerant of dissent' and is a 'turn for the worse under an increasingly repressive regime.'

ACT urged the Congress to junk the amendments to HSA, which it said will make the HSA even more repressive with much less accountability. The group challenged lawmakers to 'be on the side of democracy' and refuse to legitimize further repression of the people.

"As for us, we will push back against all attacks on our rights and freedoms. Our collective unity and strength, realized through our unions and organizations, will stand against repression and will triumph in frustrating a tyrannical regime, just as we did many times before. We will continue advancing the interests of teachers, students, and the entire nation," pledged Basilio.

ACT joined other freedom-loving groups in a protest action outside of the House of Representatives today to call for the junking of the proposed measures.