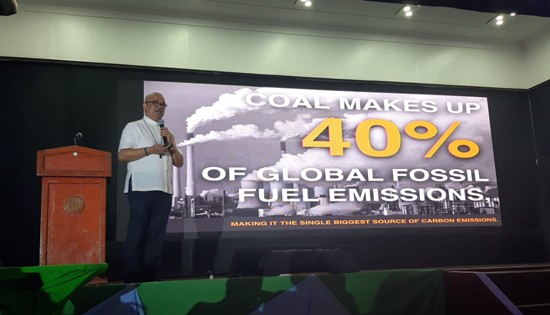 CAGAYAN DE ORO – Representing the Withdraw from Coal Campaign, a Church leader on Friday appealed to Philippine financial institutions to stop funding the expansion of coal operations in the country and support the development of renewable energy instead.

The call was made during the 3rd Philippine Environment Summit, an event that presents current initiatives contributing to the country’s social and economic development while conserving the environment, held on 26-28 February at the Grand Caprice Convention Center in Cagayan de Oro.

“As fulfillment of their moral obligation, Philippine banks must have concrete plans to phase out coal finance in the time required by today’s climate crisis. They must have clear policies restricting their exposure to coal, channeling the funds they divest from it into clean and affordable renewable energy for all Filipinos,” said Bishop Gerardo Alminaza of the Diocese of San Carlos, Negros Occidental.

While praising the SONA 2019 directive of President Rodrigo Duterte to “fast-track” the development of renewable energy resources and reduce dependency on coal, the bishop pointed out that the continuing dominance of coal in the country's energy mix calls for even more ambitious ways forward from different sectors, including the finance industry.

“Banks financing coal are not only funding the climate crisis, they are also enabling the continued suffering of coal-affected communities,” he stressed.

In addition to the 16 new coal-fired power plants added to the national fleet in the last decade, the Philippines is still looking to add a total of 12,014 MW of new coal power, making it the ninth biggest coal expansionist in the world as of 2019.

13 local banks had been identified to have loaned or underwritten USD 6.303 billion to coal interests from 2017 to the third quarter of 2019. Two of these banks, Bank of the Philippine Islands (BPI) and Banco de Oro (BDO) account for nearly 55% of this finance.

“The IPCC reported that the world has until 2030 to reduce coal use by 78% from 2010 levels to avoid even more disastrous climate impacts. As stewards of Creation, we must unite with our scientists on this and seek to veer away from a fuel that causes the suffering of our people and destruction of our Common Home,” Alminaza said.

Alminaza stated that as the Philippines is one of the most vulnerable nations to climate change, it must lead in phasing out coal, and financial institutions must take their role in it seriously – similar to the commitment of the Catholic Bishops Conference of the Philippines (CBCP) and his own diocese to divesting its resources from dirty energy technologies.

A petition letter addressed to the Bank of the Philippine Islands, the bank with which many Church organizations have financial relations, was also circulated during the event and was signed by hundreds of participants, including Bishop Antonio Ledesma of Cagayan De Oro.

“We appeal to all to join the calls as written in our letter as expression of our care for our common home and our future generations. For as one saying goes, ‘we do not inherit the Earth from our ancestors – we borrow it from our children.’ We must act swiftly for time is running out,” said Alminaza.

Launched in Manila in January and in Visayas in February, "Withdraw from Coal" is a campaign spearheaded by the Church, civil society, and people’s organizations urging Philippine banks to divest from businesses involved in coal power generation and coal extraction.