Labor unions call for the protection of those vulnerable to violence 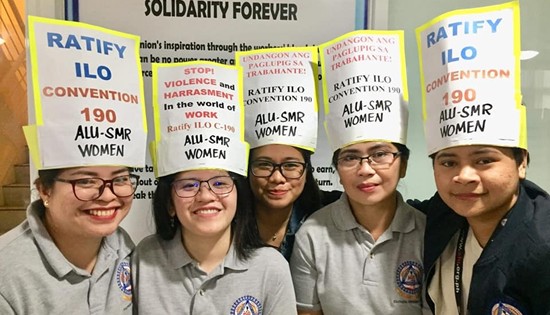 QUEZON CITY – The Associated Labor Unions (ALU) and global unions Building and Wood Workers International (BWI), and IndustriALL, are calling for the protection of workers and other persons in situations of vulnerability from gender-based violence perpetuated or condoned by individuals, institutions and the State, especially in the midst of pandemic Christmas season.

ALU National Executive Vice President Gerard Seno urged the government, employers, and communities to tighten their measures to address violence and harassment against frontliners, jobseekers and applicants, those in contractual arrangement, probationary period, night work, domestic work, women with disabilities, and in poverty.

On December 20, on the occasion of the anniversary of the 1993 adoption of the United Nations’ Declaration on the Elimination of Violence against Women, ALU National Vice President and Women’s Committee Chair Eva Arcos continued to value its pioneering explicitness from which governments are obligated to act and from which many national and international instruments and programs addressing gender-based violence were built.

Arcos, however said that, 27 years and ILO Convention 190 on Violence and Harassment (2019) after, the Philippines has gotten worse in terms of bridging the gap between law and practice, and in delivering justice to victims who died or survived from gender-based violence, and in protecting witnesses, whistleblowers and defenders.

Arcos reminds full compliance to existing women-specific laws and international instruments which the Philippines signed or ratified. Swift actions are needed for victims of gender-based violence to include right to remove themselves from an unsafe work situation, protection from retaliation, 10-day paid leave, employment facilitation, access to financial assistance or low-interest credit facility, equal access to justice mechanism, free legal assistance, establishment of more shelters in the country, and counseling services.

Seno pressed for the necessity of having gender-sensitive public officials and officers of the law, of enforcing penalties, and complying with the mandatory psychological counseling or psychiatric treatment for offenders.

Health and safety risk, flexible work arrangements, joblessness, reduced income, work from home, home-schooling, childcare, difficulties in reporting and limited access to essential services are aggravating circumstances to cases of violence and harassment that jeopardize not only women’s health and safety, but also their capability to access, remain, and advance in the labor market.

The labor unions pointed out that aside from the need to update and publicly circulate database on gender-based violence and harassment, the government, in consultations with stakeholders, should conduct regular research on the effectiveness of measures being undertaken to prevent and redress violence against women.

The labor unions have been campaigning for the Philippine government’s ratification of Convention 190.

*The UN Declaration on the Elimination of Violence against Women was adopted by the United Nations General Assembly in 1993. It covers physical, sexual and psychological violence as well as violence both at home and elsewhere in society.