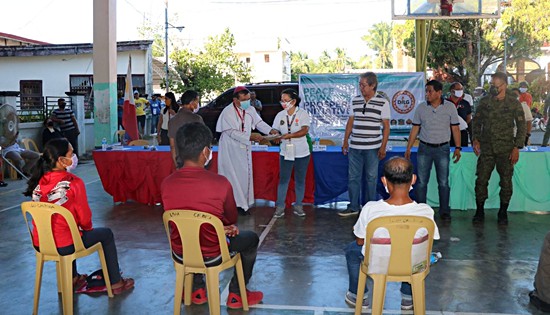 CAMP LUKBAN, Catbalogan City, Samar – A total amount of P1.855M grant were awarded to 26 former rebels (FRs) who availed of the national government’s Enhanced Comprehensive Local Integration Program (E-CLIP) and the Province’s Local Social Integration Program (LSIP). The financial grant is a way of helping the FRs to return back to mainstream society as they live normal lives. The activity dubbed, “Peace Towards Prosperity Initiative”, was conducted in separate ceremonies held in Matuguinao, Paranas and Calbiga; all in Samar on March 30, 2020.

Additional financial aid under the LSIP and E-CLIP programs will be awarded once the FRs completed the needed requirements.

Major General Diñoso III, in his remark, stated that “We are happy whenever one of your fellow rebels surrenders to the folds of the law. The Communist -Terrorist-Groups (CTGs) deceive and agitate members by injecting ideologies against the government. You are just victims of such deception.”

A former rebel-beneficiary was very much thankful and stated, “Damu an amon pagpasalamat nga guin bubuligan kami san tinuod nga gobyerno kay buwa ngay-an an esplekar san NPA nga sira an nabulig san mga tawo. Ine ngay-an an tama – an aton kasundaluhan an nabulig. Sanglit kita nga mga nagsurender pagburublig kita para mabuligan an aton gobyerno nga magpanawagan san adto pa sa kabukiran nga lumugsad na liwat para sira makatagamtam san kaupayan.” (We are grateful to the legitimate government for helping us realize that the NPA’s claims of helping the people were all lies. The truth to the matter is – our soldiers are the true ones who help us. Let us then help our brothers who were led astray by the NPA to return to the government so that they too may experience prosperity and return to the mainstream society.)

The intensified collaborative efforts of the government in the enforcement of the Whole-of-Nation Approach amidst the COVID-19 pandemic, is a reaffirmation of its commitment to provide peaceful, resilient, sustainable and economically developed Eastern Visayas.